Today, during the Asian session, oil prices grow, despite the opening with a negative gap. Now, the instrument tries to consolidate above 32 dollars per barrel and approaches local highs, renewed last Thursday. Positive dynamics is due to the improving prospects for concluding a new agreement on OPEC+ production limitation. Last week, the US President Donald Trump said that after a conversation with Russian President Vladimir Putin and Crown Prince of Saudi Arabia Mohammed bin Salman, the parties agreed to an unprecedented reduction in world production by 10 million barrels per day. Later it became known that Russia is ready to reduce only by 1 million barrels and only with the participation of the US.

OPEC+ video conference, which was originally scheduled to take place on Monday, is expected this week. It is predicted that the parties may come to some kind of decision but the skepticism in the mood of analysts is very high.

On the daily chart, Bollinger bands grow slightly. The price range expands but not as fast as the "bullish" moods develop. MACD grows, maintaining a strong buy signal (the histogram is above the signal line). Stochastic grows but reaches its highs, indicating that the instruments may become overbought in the ultra-short term.

It is better to keep the current long positions until the situation becomes clear. 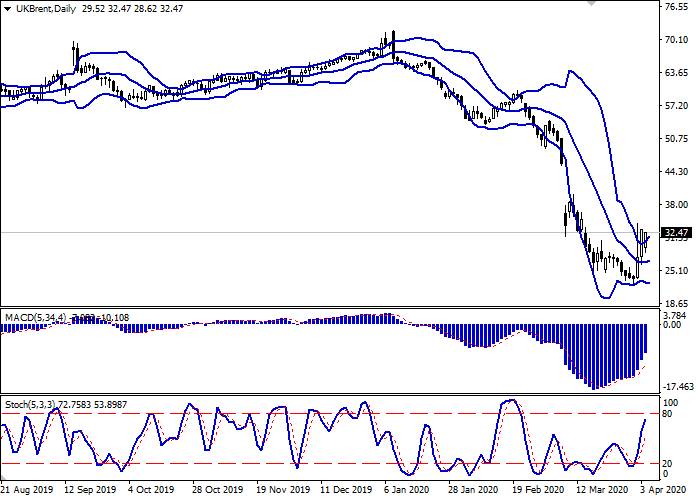