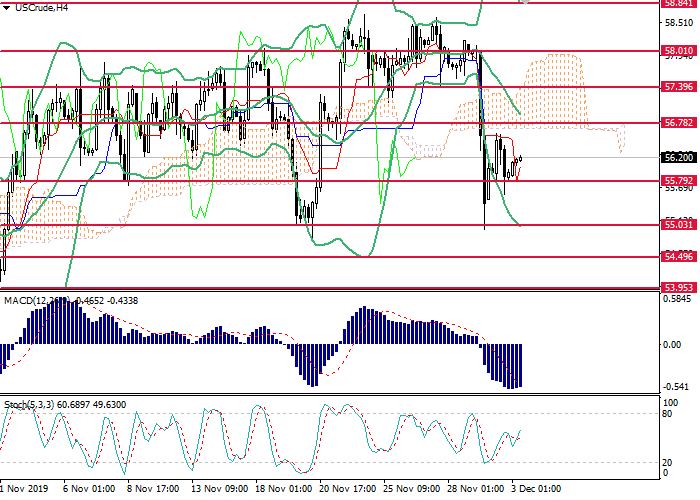 This week, oil prices are recovering ahead of the OPEC summit, planned on December 5–6 in Vienna.

Additional support for the instrument was provided by positive data on industrial production in China, which were published over the weekend. Chinese Manufacturing PMI for the first time since April 2019, exceeded the key level of 50 basis points. China is the largest consumer of hydrocarbons in the world, so the restoration of its industrial sector will provide quotes with moderate short-term support. However, a drop in business activity in the US manufacturing sector is still limiting the pace of oil market recovery.

Today at 23:30 (GMT+2), API Weekly Crude Oil Stock will be released. According to a Bloomberg poll, the figure fell by 1.5 million barrels over the past week.

On the 4-hour chart, a downtrend correction is observed. The instrument consolidates at the bottom of Bollinger bands. The indicator is directed downwards, and the price range expanded, indicating a further decline. MACD is in the negative zone, keeping a strong sell signal. Stochastic approaches the oversold zone, a signal to enter the market is not formed.