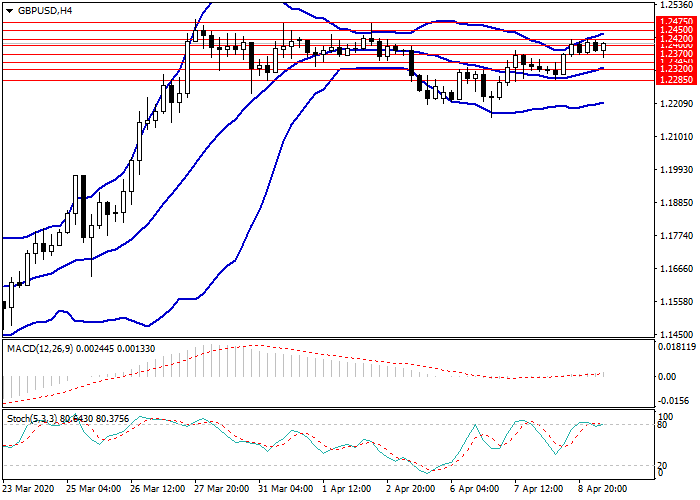 GBP today strengthened against USD after the publication of controversial February statistics in the UK. GBP was supported by Manufacturing Production, the level of which grew by 0.5% MoM, exceeding the forecast of 0.1%. YoY, the indicator decreased by 3.9%, which did not put pressure on the pair, as analysts expected a decrease of 4.0%. Index of Services increased by 0.2%, which supported the instrument. Industrial production increased by 0.1% MoM, justifying the forecast, and decreased by 2.8% YoY (against the forecast of –2.9%). A negative factor for GBP was the decline in GDP by 0.1% MoM (an increase of 0.1% was expected).

Today, the market is waiting for the publication of revised Initial Jobless Claims data in the US (14:30 GMT+2): it is expected to decline to 5.250M from 6.648M. The pair may be affected by Michigan Consumer Sentiment Index, which will be published at 16:00 (GMT+2). The market is expected to be highly volatile.

On the H4 chart, a side trend has formed. The instrument is traded within a narrow corridor formed by the upper and center lines of Bollinger Bands. The indicator cloud is narrowed and it is likely that lateral dynamics will remain in the short term. MACD histogram is near the zero level keeping minimum volume. The signal line is moving horizontally without forming a signal to enter the market. Stochastic is on the border of the neutral zone with the overbought zone; its lines are moving horizontally.