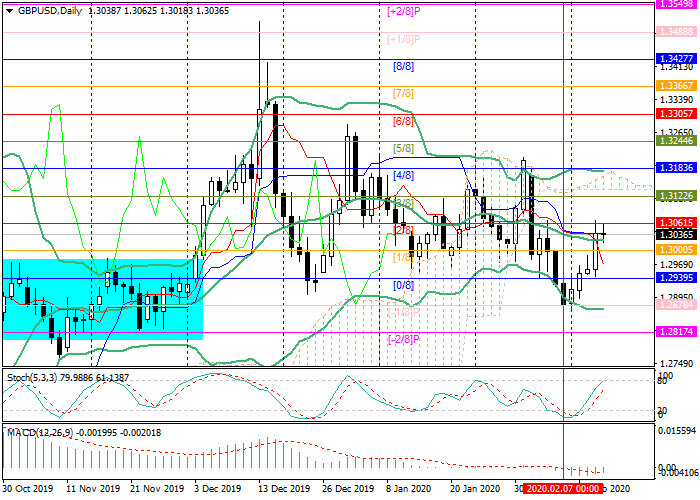 During the week, GBP was actively strengthening against USD, and yesterday, the price rose to 1.3061 (Murrey [2/8]) amid the resignation of Chancellor of the Treasury Sajid Javid. Officially, the reason for it was Javid’s disagreement with the demand of Prime Minister Boris Johnson to replace his advisers, however, experts believe that the reason is deeper and lies in the disagreement of Javid and Johnson regarding the increase in government spending (the former official advocated limiting them). The new Chancellor is the former Chief Secretary to the Treasury Rishi Sunak. The market expects him to move away from his predecessor's policies and increase budget spending, which should stimulate economic growth. A draft of the first budget of Great Britain after Brexit should be submitted in March.

The price is testing 1.3061 and, after consolidation above it, may rise to 1.3183 (Murrey [4/8], the upper line of Bollinger Bands). Otherwise, the decline will resume to 1.2878 (Murrey [−1/8], the midline of Bollinger Bands) and 1.2817 (Murrey [−2/8]). Technical indicators don't provide a clear signal. Stochastic is directed upwards, approaching the overbought zone, which is fraught with a reversal. MACD histogram is declining in the negative zone.