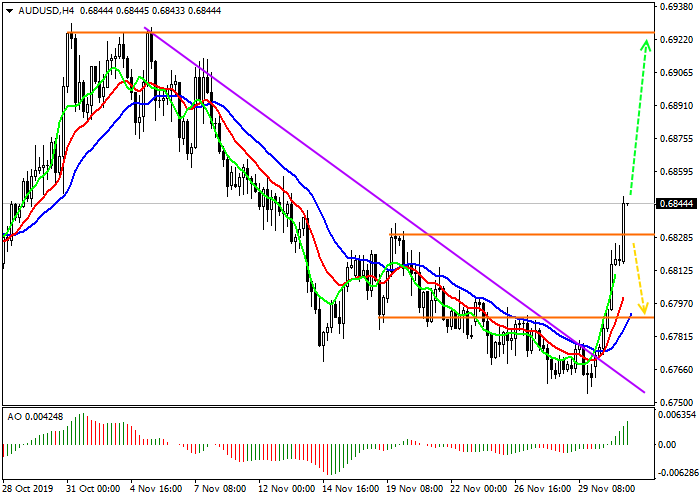 The pair is influenced by data from Australia on Building Approvals for November, which came out much worse than expected and showed a decrease of 8.1% compared with an increase of 7.2% in October. AiG Manufacturing PMI in November fell to 48.1 points against 51.6 points in the previous month. The reason for such weak statistics can be in unresolved trade negotiations between the US and China. In addition, President Donald Trump once again called on the US Federal Reserve to cut the key rate as soon as possible, which immediately affected the US dollar, as a result of which the instrument strengthened.

As a result, this week the pair will be under pressure from the dynamics of the USD Index, which may lead to its significant strengthening.

Absolutely expected growth at the opening of trading at ASX broke the downward channel and indicated a strong correction, which could soon become an independent trend. The Alligator indicator clearly responded with a reversal and issued a steady buy signal. In the future, growth may continue.

If the asset continues to grow and the price remains above the level of 0.6830 before the start of trading in the USA, previously opened buy positions with the target at 0.6930 will be relevant. If there is no position, it can be opened from the current level. Stop loss in this case should be moved beyond the support level to 0.6820.

If the asset declines, and the price consolidates below the local high and the support level at 0.6830, short positions can be opened with the target at 0.6790 and stop loss at 0.6850, placed above the local high.