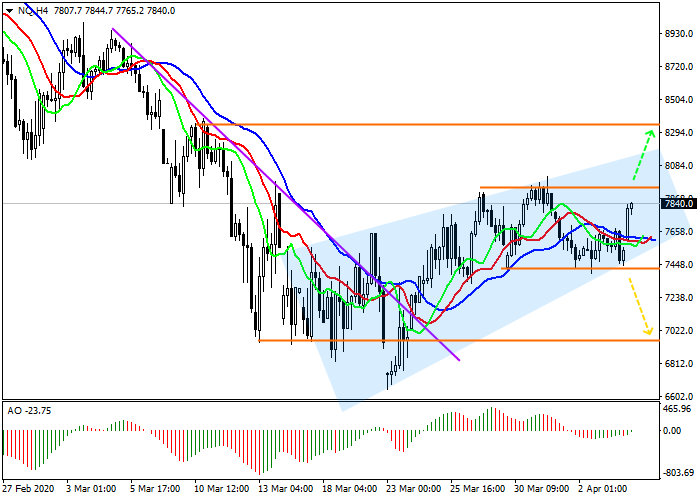 During the previous trading session, one of the leading US index Nasdaq 100 moderately declined and is now trading at 7530.0.

Traders are focused on the rapidly decreasing stocks of American air carriers. The absolute leader in the fall among them is United Airlines, whose shares have lost more than 70% in 2 weeks. Just yesterday, it became known that more than 90% of its flights to New York airports are canceled due to quarantine. Thus, due to the closure of borders and the restriction of domestic flights, United Airlines has already lost more than 83% of its flights and is on the verge of bankruptcy.

Despite the increased volatility, corrective growth continues and more and more takes on the outlines of the Wedge pattern. The Alligator indicator issued a new buy signal, indicating the intersection of EMA with an upward trend. The histogram of the AO oscillator is still below the zero line but is preparing to enter the buying zone.

After correctional growth, buy positions that may be opened after the breakout of the resistance level of 7900.0 with a target at 8400.0 and stop loss of 7700.0 will be relevant.

After a reversal and continued decline or consolidation below the local minimum around 7440.0, sell positions with the target at 6900.0 will be relevant. Stop loss is above the local resistance, around 7600.0.