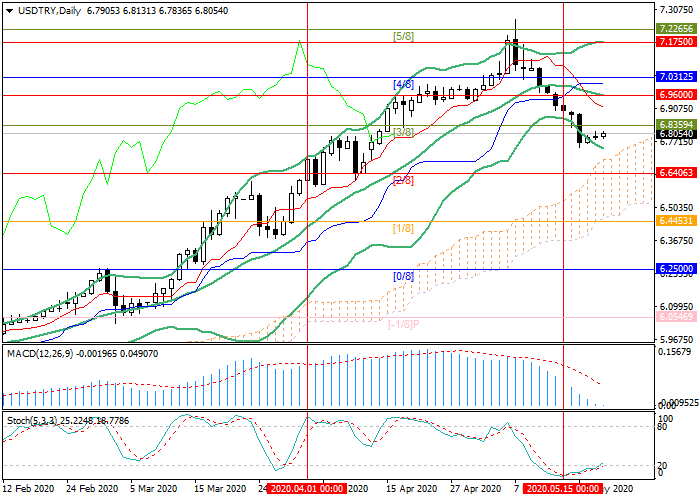 At the beginning of the week, the USD/TRY pair fell to 6.7486 but then recovered moderately. Initially, USD was under pressure amid comments by Fed Chairman Jerome Powell, who said that the US economy could fall by 30% in the second quarter, its recovery would not be quick, and by the end of the year, it would not reach the pre-crisis level. However, after a series of steps of the Turkish Central Bank, TRY began to weaken. On Wednesday, the expanded the swap lines with Qatar from $5 to $15 billion, which will provide additional funds to support the economy. On Thursday, the regulator reduced the rate to 8.25%. Officials’ comments were optimistic: in April and early May, the Turkish economy reached the minimum and may begin to recover. As the coronavirus undermined domestic demand, tourism, and exports, the bank lowered its forecast for inflation this year from 8.2% to 7.4% and may continue a gradual reduction in rates, which will put pressure on TRY.

The downside potential is not exhausted since Bollinger bands reverse downwards, and MACD is ready to enter the negative zone, however, as Stochastic left the oversold zone, a correction is not excluded.

Short positions may be opened from the current level with the target at 6.4453 and stop loss 6.8970.